Urban Waite is a good guy who writes evil things (or maybe vice versa.) He is the author of The Terror of Living, The Carrion Birds, and Sometimes the Wolf. All of which have been named to various Best Book of the Year lists, such as Esquire, The Boston Globe, The Sun Sentinel, LitReactor, and Booklist. His short fiction has appeared in the Best of the West anthology, the Southern Review, AGNI, Gulf Coast, and many other journals. All of his past novels have been optioned for film and have been translated into nine languages. The novels are available in more than twenty countries worldwide.

His forth novel, Far Cry Absolution, published by Simon & Schuster and Ubisoft, is a novel tie-in for the bestselling, Far Cry video game series.

The official novel of Far Cry 5, the #1 video game in the world.

"This novel reads like an old school pulp crime fiction but is set in the present-day hardscrabble rural America of anti-government militias and apocalyptic cults… Many times, a novel written to promote a game can seem to be a thinly veiled side mission. This is not that… Waite has crafted a story that gives the reader a look inside the game but also stands on its own… If the game comes close to the tone and plot of the book I’m sure it will be a great success. I will definitely be playing it. I will also be buying books written by Urban Waite."

"Absolution amazes taking its time and giving the right thickness to the characters. Environments (wild nature), topics covered (faith, fanaticism, freedom and ideology) and the constant presence of firearms link this novel to the extreme stories of a Lansdale (horror Waltz, The Night of Drive-In) or a Gischler (The cage of the apes) perhaps with a prose a little less anarchic and pressing, more measured and objective, but equally engaging."

"Another of the best videogame books of 2018. Written by Urban Waite… (Far Cry Absolution) is a novel set and based on the recent Far Cry 5. If you are interested in the game and its characters… you can not miss this novel."

Hope County, Montana. Land of the free and the brave, but also home to a fanatical doomsday cult known as The Church of Eden’s Gate that has slowly been infiltrating the residents’ daily lives in the past years.Mary May Fairgrave, a local barkeep, has lost almost everything to the Church: her parents died in suspicious conditions and her brother, entranced by the cult leader’s charismatic words, has vanished. When the authorities refuse to investigate further, she decides to take matters in to her own hands.Local hunter William Boyd was saved by Eden’s Gate years ago, during the darkest moments of his life. When his duties lead him to cross paths with Mary May, the daughter of one of his old friends, he soon discovers that what is happening in the county is far from what he believed.Up against an omniscient and dangerous adversary, Mary May stands little chance. But the unexpected intervention of William Boyd will change her journey — as well as his. 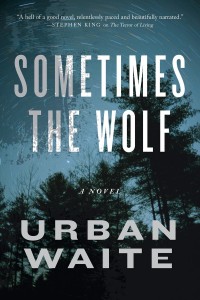 SOMETIMES THE WOLF has been named a Best Book of the Year by THE SUN SENTINEL and LITREACTOR in addition to being an INDIE NEXT PICK, an AMAZON EDITORS' PICK, a HIGH COUNTRY NEWS EDITORS' PICK, and part of KIRKUS REVIEW'S FALL HITS LIST.

"A brisk plot, well-developed characters, thoughtful reflections on the ebb and flow of family ties, and — most of all — Waite's eloquent language describing his setting's untamed beauty."

"It's a rare thing to balance a thriller plot on characters with such stooped shoulders, but Waite manages the feat with surprising dexterity. Another emotionally rich novel from a very special writer."

"Sometimes the Wolf is a tremendous novel by a rising powerhouse of a writer. Urban Waite tells tense, thrilling stories with thoughtfulness and emotional clarity, and his prose is simply astonishing. Anyone who is late to the party couldn't ask for a better entry point than this hybrid of crime drama and father-son story."

MICHAEL KORYTA, New York Times bestselling author of Those Who Wish Me Dead

"Waite weaves a gripping tale of family intrigue, betrayal, lies, deception, kidnapping, murder, and even forgiveness. The story flows faster as the pace of action increases. Highly recommended for fans of Dennis Lehane and Elmore Leonard and gritty thrillers in general."

Set in the Pacific Northwest, a spellbinding story of family, violence, and unintended consequences that showcases the searing prose, soulful characters, and vivid sense of place of an acclaimed writer in the tradition of Cormac McCarthy, Dennis Lehane, and Elmore Leonard.

Sheriff Patrick Drake tried to lead an upstanding life and maintain some financial stability until his wife passed away. He did okay for a while, singlehandedly raising his family in a small mountain town. Then he was hit with money troubles, fell in with some unsavory men, and ended up convicted of one of the biggest crimes in local history.

Twelve years later Patrick is on parole under the watchful eye of his son Bobby, who just happens to be a deputy sheriff in his father’s old department. Bobby hasn’t had it easy, either. He’s carried the weight of his father’s guilt, forsaking his own dreams, and put off the knowledge that his own marriage could be stronger and more hopeful. Yet no matter how much distance he’s tried to put between himself, his father, his grandfather, and the past, small town minds can have very long memories.

But trouble isn’t done with the Drakes—and a terrifying threat boils up from Patrick’s old life. And this time, no one will be spared. . . .

(From the William Morrow book jacket for Sometimes the Wolf) 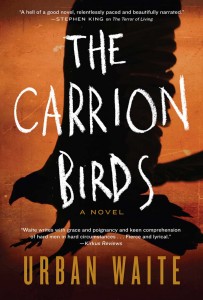 "A lean and mean, modern-day noir western filled with complex characters and situations . . . surely a candidate for best crime book of 2013."

"Waite follows his acclaimed first novel, 2011's The Terror of Living, with another searing western noir. Three people face terrifying moral choices as they each wish for what they can't have."

"A Pandora's box of chain reactions that wreaks havoc on a small southwestern town, havoc that is described in such graphically poetic prose that it occasionally makes the hair on even a cynical noir fan’s head stand on end."

"The Carrion Birds, a tale of a Vietnam vet--slash--criminal enforcer is as muscular and laconic as anything by Cormac McCarthy, yet it crackles with humanity."

Set in a small town in the Southwest, a soulful work of literary noir rife with vengeance and contrition from a fresh voice in fiction—the author of the highly acclaimed The Terror of Living

Life hasn’t worked out the way Ray Lamar planned. A widower who has made some tragic mistakes, he’s got one good thing going for him: he’s calm and efficient under pressure, usually with a gun in his hand. A useful skill to have when you’re paid to hurt people who stand in your boss’s way.

But Ray isn’t sure he wants to be that man anymore. He wants to go home and see the son he hopes will recognize him. He wants to make a new life far from the violence of the last ten years, and he believes that one last job will take him there. A job that should be simple, easy, clean.

Ray knows there’s no such thing as easy, and sure enough, the first day ends in a catastrophic mess. Now the runners who have always moved quietly through this desert town on the Mexican border want answers. And revenge. Short on time, with no one to trust but himself, Ray must come up with a clever plan or Coronado, New Mexico’s new lady sheriff will have a vicious bloodbath on her hands.

Set in a town once rich with oil, now forgotten and struggling, The Carrion Birds is filled with refreshingly real and vulnerable characters. With its masterfully orchestrated suspense and unexpected bursts of lyricism, this is a remarkably unsettling and indelible work in the tradition of Cormac McCarthy, Elmore Leonard, and Dennis Lehane.

(From the William Morrow book jacket for The Carrion Birds) 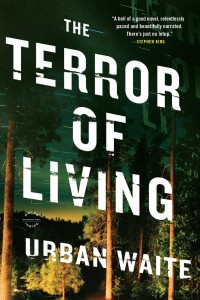 THE TERROR OF LIVING has been named a Best Book of the Year by THE BOSTON GLOBE, BOOKLIST, and ESQUIRE MAGAZINE in addition to being an INDIE NEXT PICK and an AMAZON EDITORS' PICK.

"A hell of a good novel, relentlessly paced and beautifully narrated. There's just no let-up. An auspicious debut."

"It's getting harder and harder to tell the good guys from the bad guys in a modern western, of which Urban Waite’s first novel, The Terror of Living, is one fine specimen."

"This formidable fiction debut by Urban Waite unfolds in short and often all too memorably violent sequences, yet the author also allows his characters room to wrestle with private demons as the intense, often gruesome tale races toward its satisfying resolution."

"Told with a force that lifts off the page, and a sentient clarity about ordinary people trapped in crisis, it’s a superb debut thriller."

"The Terror of Living is a smart, swiftly-paced and bloody Western for our moment. Urban Waite is a writer who won't let a reader wander away--he keeps you reading, and reading, and rewards all your attention with a powerhouse story and prose to match."

DANIEL WOODRELL, author of Winter's Bone and The Bayou Trilogy

"In the tradition of No Country for Old Men, Urban Waite has written a nail-biter that takes off from the get-go and never stops, a book chock full of memorable characters and kick-ass writing. Clear your calendar before reading this one, folks, because once you start there's no stopping until the end, which arrived much too quickly for this reader. A smashing debut."

Phil Hunt is in deep trouble.

Hunt is on the run from two men: Drake, the deputy sheriff who intends to catch him, and Grady, the vicious hitman who means to kill him.

For twenty years Hunt has lived in Washington State, raising horses with his wife on his small farm. He's tried to stay out of trouble, wanting only to make a living and taking the occasional illicit job in order to do so.

Then his last delivery goes horribly wrong, and the chase is on from the mountains down into the Puget lowlands. To have any chance of rescuing his quiet life, Hunt will have to deal with deputy sheriff Bobby Drake, a good man determined to make up for his father's tainted legacy and Grady Fisher, a very bad man intent on making a name for himself in the most violent ways. With a fondness for blood, Grady takes pleasure in the use of knives, taking Hunt's life apart piece by piece, all the while leaving a trail of victims across the state.

Relentless and gorgeously written, with original characters and a vividly powerful sense of place, THE TERROR OF LIVING heralds the arrival of a writer who will be compared with the great suspense novelists.

(From the Little, Brown book jacket for THE TERROR OF LIVING)